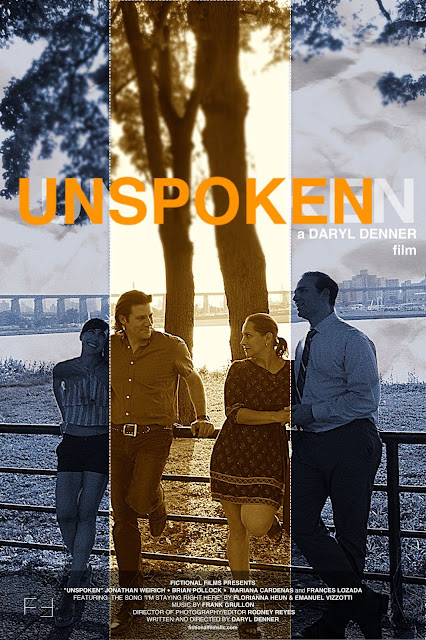 Last week, the trailer for the feature length film "Unspoken" was released.

"Unspoken" was written and directed by Daryl Denner and shot and produced by Rodney Reyes and the Fictional Films crew.

The link for the trailer can be seen here (or by clicking on the pic):

Before the release of the trailer, I attended a small screening party for the cast and crew.

As I said to Daryl afterwards, the first fifteen minutes were excruciating for me because of the pain of seeing myself on screen.  As the movie began and I saw myself on the screen, I went through the classic emotions of self doubt and self criticisms.  However, at a certain point, I fell into the story and forgot I was watching myself.  The movie pulled me in and I enjoyed seeing the interactions of the characters, the pace of the story and how the ending came together.

As a working actor in New York City, there's the attitude, belief and dream that I should have every role that I want or audition for.  However, reality is far harsher.

Twenty years ago, I would have said that just being an actor and having a lead in an indy NYC film would have been the best and I'd be fine with that.

I had the same feeling 10 years ago.

I woke up the day after the screening and looked back on all the years I've been working and thought about the film and realized, the reality is even better than the dream.

Of course, the financial compensation hasn't been ideal, but I always wanted to be a certain type of actor, with NYC credibility.  There were actors, filmmakers, and movies that I always admired and spent the bulk of my career trying to emulate. I have always believed that a career is an unfolding process that includes successes and setbacks.  Current work is only a precursor to the next job. I hope that this project is another beginning that will open up wider doors for the next part of the journey.

As we were filming, I told many people that the whole process had been positive and productive.  Everyone on set worked hard and competently on their jobs to make the overall production as best as they could.  I enjoyed working through the scenes with the other actors and feeding off their enthusiasm and creativity.

Plus, I believe that our collected effort is apparent on the screen.  As with any indy movie, perfection isn't necessarily attainable.  But, we all gave our best, the movie is high quality and I'm excited for as many people to see the end product as possible.

We've begun submitting the film to festivals and I hope that the effort is recognized.  I'm proud of what we were able to accomplish.

I'll keep everyone posted about any festivals where we'll be fortunate enough to screen, and I hope that our friends will be able attend!

If you can, please check out some of the other work that the actors Bryan, Frances, Mariana, Samantha and Star have done, as well as some of Daryl's and Rodney's other movies and projects.

The blurb for "Unspoken" reads:


Fictional Films presents
Unspoken written and directed by Daryl Denner.
Starring Jonathan Weirich, Brian Pollock, Mariana Cardenas & Frances Lozada. Also starring Samantha Glovin and Star Davis.
Music by Frank Grullon.
Featuring the song "I'm Staying Right Here" by Florianna Heun & Emanuel Vizzotti.
Married couple Chris and Judith have been best friends with David for many years. But when tragedy hits David is forced to examine his true feelings for Judith...feelings which could potentially destroy everything he has loved and cherished.
fictionalfilmsllc.com
Other links to the production can be found here: