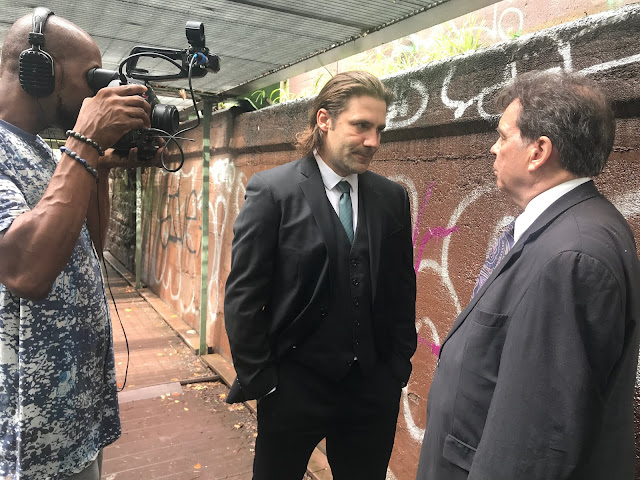 Last Saturday morning I teamed up once again with actor Mark Solari and the team at DigitalBoy Film Works to film our scenes for the pilot of "The Bench."
We shot these scenes before, in the Spring of 2014 and Summer of 2015, during earlier interpretations of the story.  However, technology and ideas for the end product changed.


Starting last fall director/writer Jesse McCullough began rewrites, gathered a small team, and started rehearsals on an expanded script.  My friend Mark and I once again reprised the parts of the hitmen duo.

Also, Heseti Kheper returned as the Director of Photography.  However, a slight wrinkle was thrown in, as well.  In the last year, independently of me, Jesse and my filmmaking partner in crime Rodney Reyes met each other in the small world of North Jersey independent filmmakers.  With mutual respect and similar interests, Jesse asked Rodney to come and help out with filming.

Since we last filmed The Bench, I've worked with DigitalBoy Film works on a few other projects, notably a couple of submission commercial for the Doritos Super Bowl Contest.

I always enjoy my time around Heseti and Jesse.  The sets are no fuss, easy going, efficient and we tend to laugh more often than not.  Mark and I have worked together on various projects over the years and we always seems to find a groove that makes acting exciting and fun rather than work.

Having Rodney also be on set was just a bonus, adding to the creative and happy atmosphere.

Mark and I took an early train from Penn Station to Bloomfield, New Jersey.  Once more, we were to film in Watsessing Park, near the Garden State Parkway.  However, once we stepped off the train, the heavens opened up and a biblical downpour began.  Mark and I were trapped under an overpass for a good 15 minutes while waiting for the thunder and lightening to pass, or for us to be swept into the rivers that were forming on the side streets.

Eventually, Mark and I arrived at Jesse's to wait out the rest of the storm along with Heseti and Rodney.

The rain stopped mid-morning and we piled into Jesse's car to head to the shooting location.  The rainstorm was a bit of blessing.  The storm caused the heat to subside for a couple of hours before the sun reappeared.  Surrounding the New York City area the last few weeks has been a brutal heat wave, at times the humidity insufferable.

Luckily, for the small amount of time we were shooting the weather was tolerable, especially since both Mark and I were in suits.

On location we moved through the shot list quickly and efficiently.  By this point, Mark and I knew the characters, knew the scene and were able to do each take without much difficulty.  Plus, with two cameras we were able to double our productivity.  Jesse added a few odd angles to the shot list, including having Heseti climb the train tracks shooting us from above from in front and behind to give a bit more footage to post-production.

By the time the sun started to peak through the clouds and heat up the day, we had moved onto the eponymous 'Bench' for Mark to have his death scene.

After a few quick takes we piled once again into the car and headed to Jessie's.  From Jessie's, Mark and I got a ride to Newark, said our goodbye's to Heseti and Rodney and journeyed back to the City.

Another day in the books, again with the hardest parts of the day having nothing do with the actual filming.

Jessie mentioned that he's working on setting up a sizzle reel for the project to share before we shoot anything else from the pilot.

In the last post about "The Bench" I wrote the synopsis as:

I'll post more information about either more shooting days or the releasing of any footage when I know more! 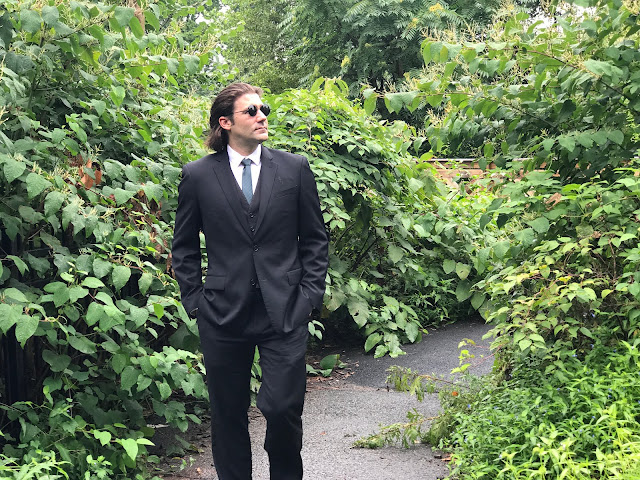 Making a turn to under the train tracks.  I think I'm looking for the go signal from Heseti at this point. 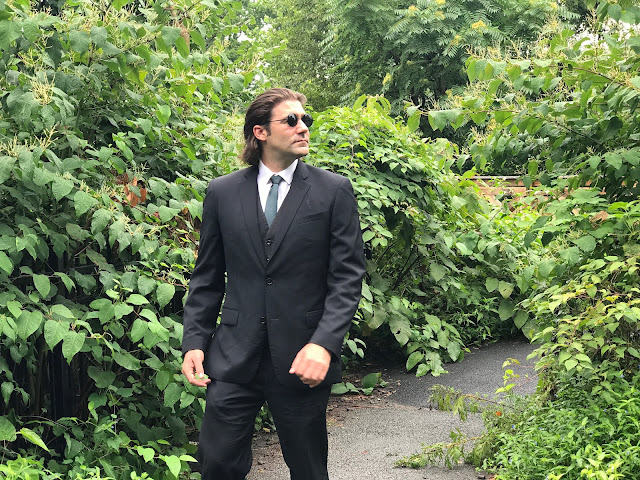 In motion before the 'action.' 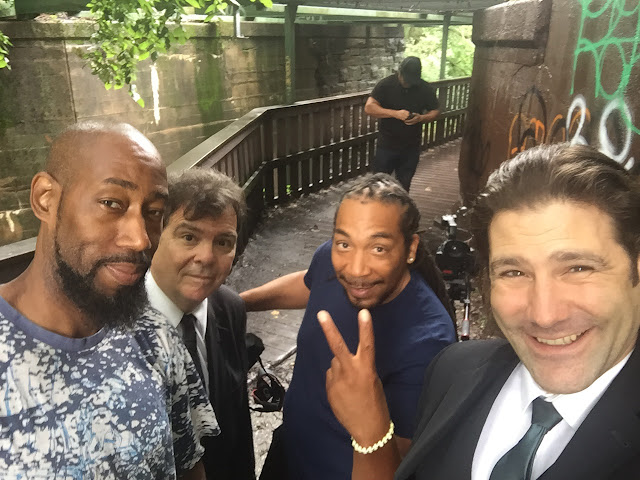 A quick selfie as Rodney messes with the microphone receiver. 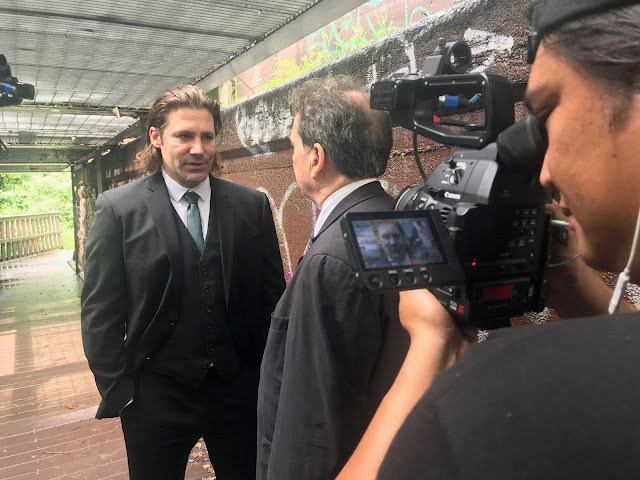 From Rodney's angle during the scene. 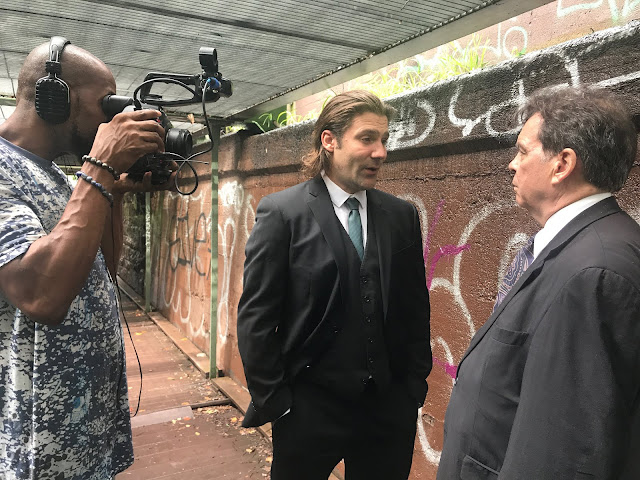 Heseti covering Mark during the scene 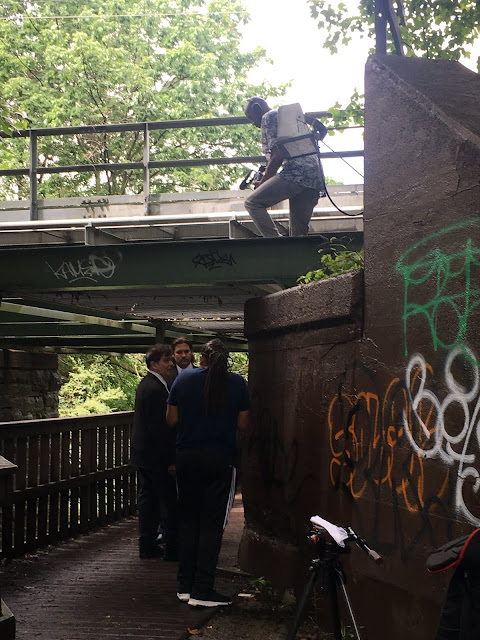 Heseti climbing onto the train tracks. 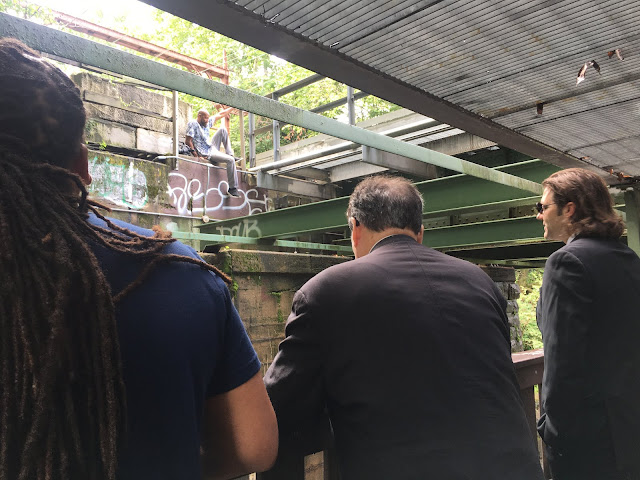 Heseti on the train track from the other side. 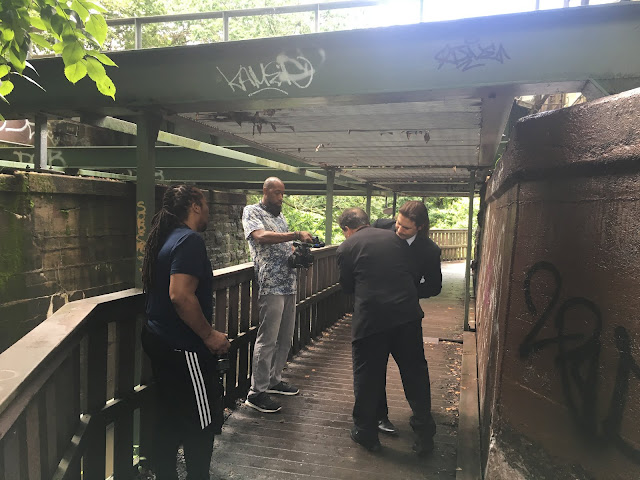 The beginning of the stabbing sequence 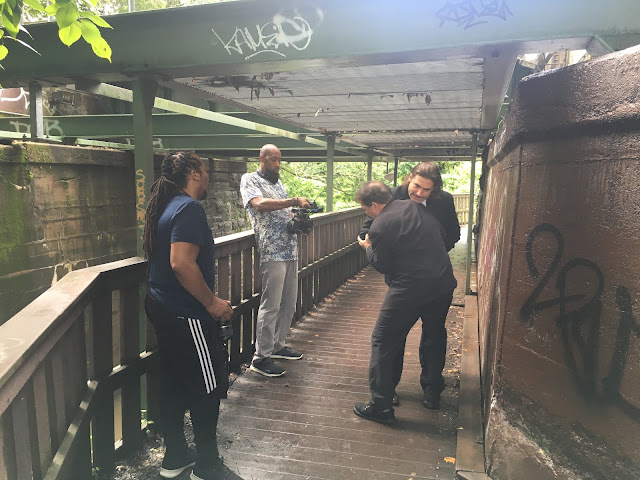 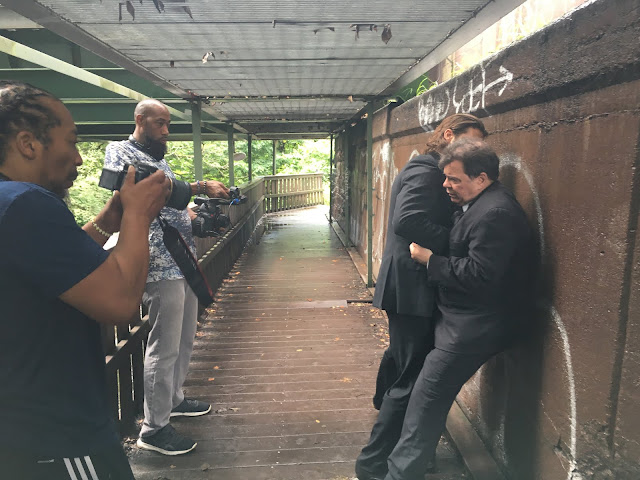 Turning the knife and then dragging it 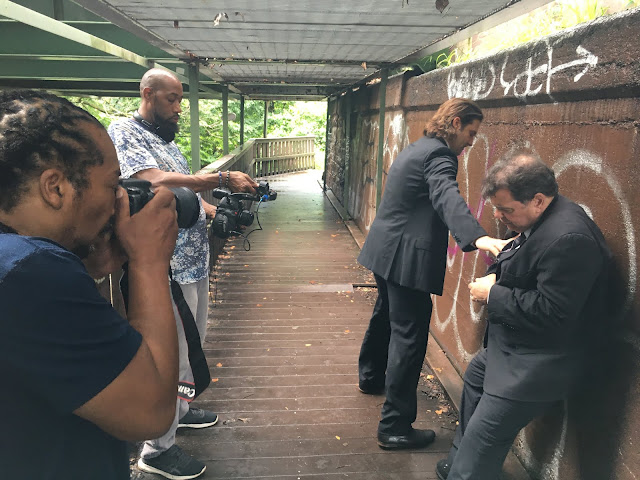 Getting rid of the trash 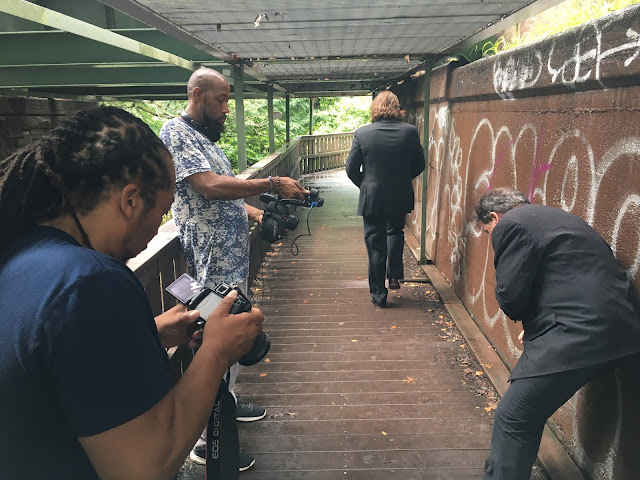 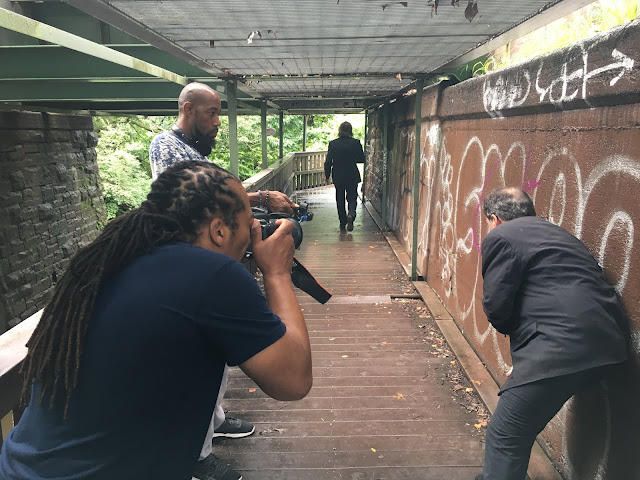 Leaving the scene of the crime 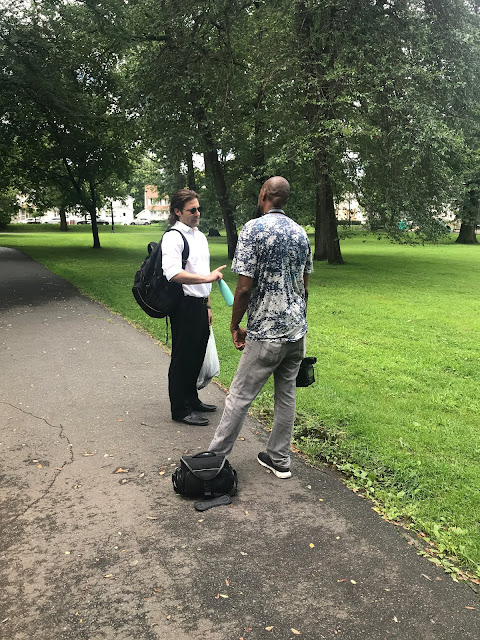 Heseti and I at the park, starting to warm up 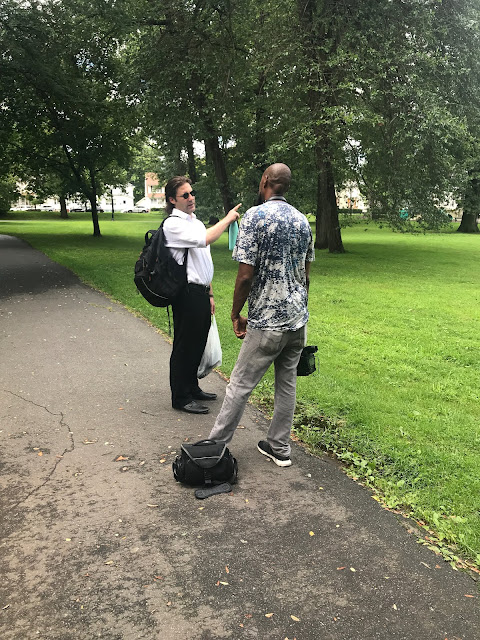 I doubt that I'm pointing at anything important 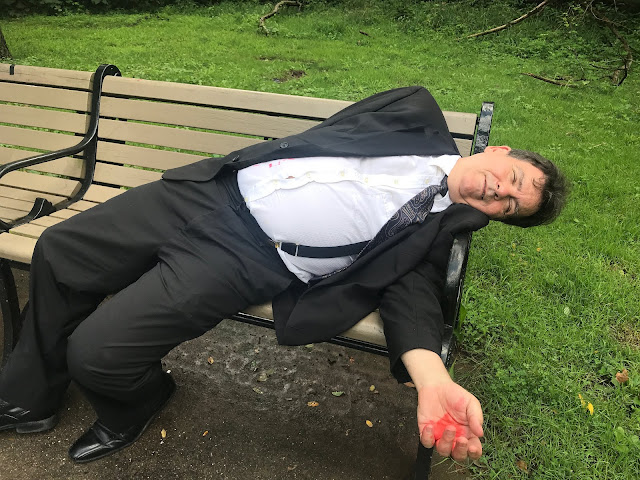 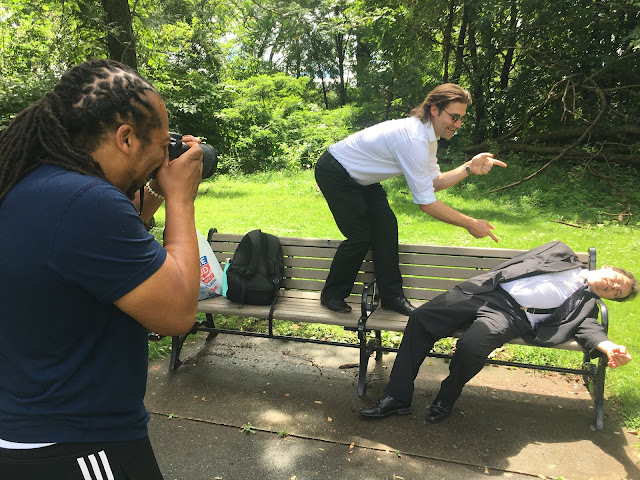 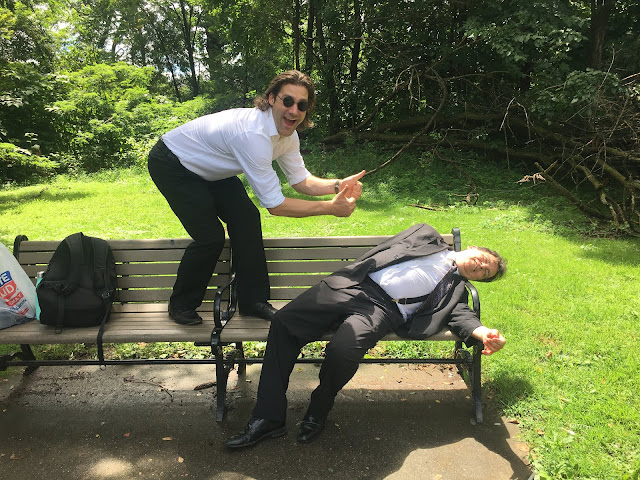 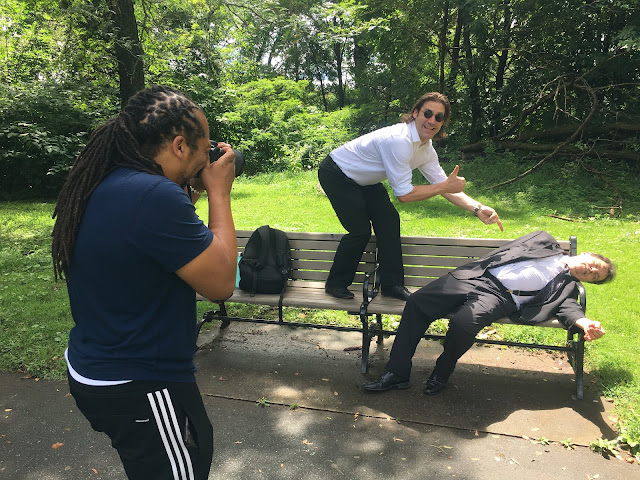 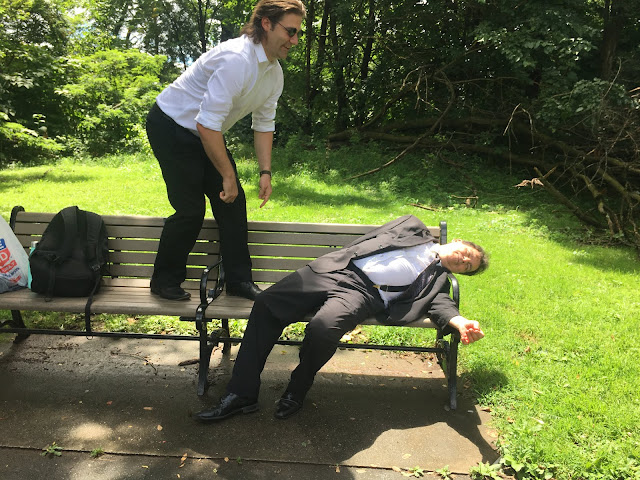 Ok it's not funny anymore 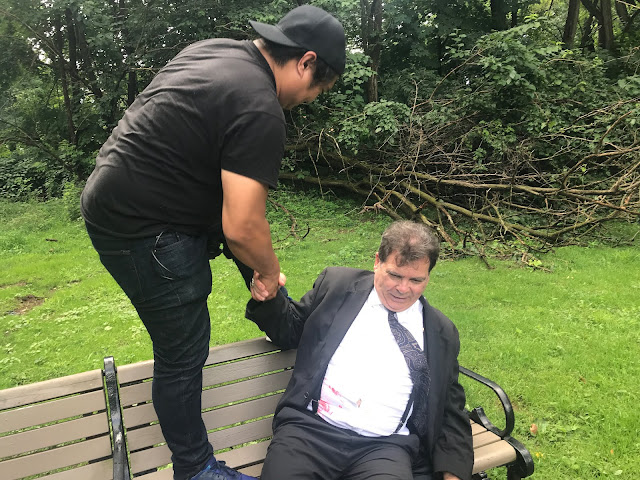 At least Rodney's a nicer guy than me
Posted by JTWeirich at 3:18 PM