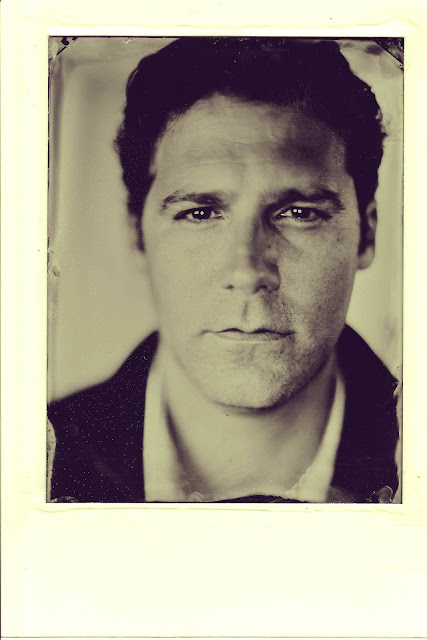 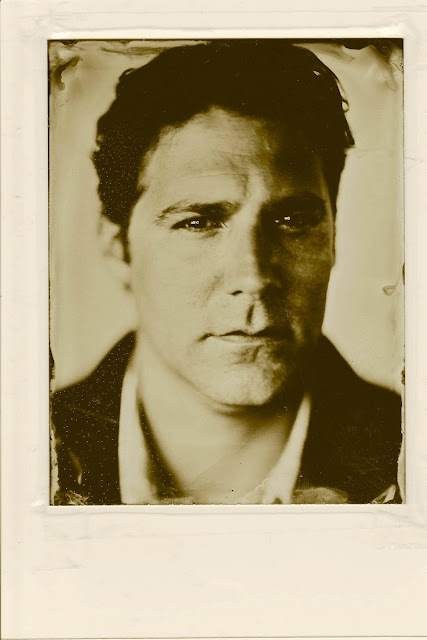 The photos were taken in San Francisco in September.  The photographer only took two shots.  The were done on an old fashioned tintype style.

Tintype, also melainotype and ferrotype, is a photograph made by creating a direct positive on a sheet of iron metal that is blackened by painting, lacquering or enamelling and is used as a support for a collodion photographic emulsion.
Photographers usually worked outside at fairs, carnivals etc. and as the support of the tintype (there is no actual tin used) is resilient and does not need drying, photographs can be produced only a few minutes after the picture is taken.
An ambrotype uses the same process and methods on a sheet of glass that is mounted in a case with a black backing so the underexposed negative image appears as a positive. Tintypes did not need mounting in a case and were not as delicate as photographs that used glass for the support.

Last month, I was in San Francisco visiting my cousin and extended family.  One night we were wandering around the mission district and wandered past a store that was getting ready to throw a party.  My eye was caught by a large portrait hanging in the back wall that reminded me of Richard Avedon.

I wandered in while the caterers were setting up the bar and kitchen and walked over to the photograph.  I struck up a conversation with a slight man that was setting up a table beneath the picture.  As we talked, I discovered that he was the photographer.  The party that they were setting up was a grand opening of the store which featured new independent photographers.  For the party that night he had set up a station to take portraits of the guests with his tin-type camera.

The difference between this sitting versus the others was the preparation.  The photographer was gentle, unassuming and quickly put me at ease.  I sat on the stool that had a large arm like contraption coming from behind that was to support and hold still my head.  The way the stool and arm forced me to sit straight was awkward and slightly uncomfortable.

The exposure time is three seconds.  The subject has to remain perfectly still, otherwise the photo becomes grainy and out of focus.

As I sat, he calmly prepared the chemicals for the positive.

The photographer and I talked for a few seconds.  The Rolling Stones' Exile on Main Street was playing in the back ground, the song Let It Loose.   My cousin and extended family waited patiently in the store.  The studio lights were bright in my eyes.  In a very gentle manner the photographer said, "ok, just relax and hold."

He walked looked into the camera and I started to get up.

He looked at me and then into the camera and said softly, "ok, I liked that.  Do you mind if we do another, but just slightly different?"

"Turn your chin slightly towards me," was the only direction he gave me.

Another three seconds passed and then he let out another, "Ok.  I think those are going to turn out great."

We chatted for a few more minutes and he said we could come back later in the evening to pick up the photos.

After dinner, we returned to the store.  A major party was raging, music, food, drinks, crowded with people spilling out into the street.

My cousin and I fought our way to the back of the room to where the photos were being displayed in a glass case on the table that was positioned under the portrait that had originally drawn me into the store hours earlier.

The photos were raw, immediate, direct, incredibly honest.  They were unlike any other photo of me.  At first, I was just fascinated by the novelty of the photographs, but after reflection believe them to be an interesting professional headshot.

I went to go thank the photographer and say goodbye, but he was surrounded by a crowd watching him prepare the positives for the next sitting.

Posted by JTWeirich at 10:16 AM No comments:

On YouTube, there's a bootleg clip of Bruce and The E Street Band playing Incident on 57th St. from a 1978 concert in Passaic, NJ.

The clip is raw, yet all all the passion, energy, soulfulness, drama and bravado of the song is captured.

Posted by JTWeirich at 7:55 PM No comments:

Ok, I found on YouTube a bootleg copy of Incident on 57th St. that Springsteen played the night that Stacy, her daughter, my brother and I were there. The recording is really bad, for the most part unwatchable, which is comparable to the sound, entirely horrible.

Yet, you still get the sense of excitement and gravity that he brought to the song that night.

Posted by JTWeirich at 7:47 PM No comments:

The Wild, The Innocent and the E Street Shuffle 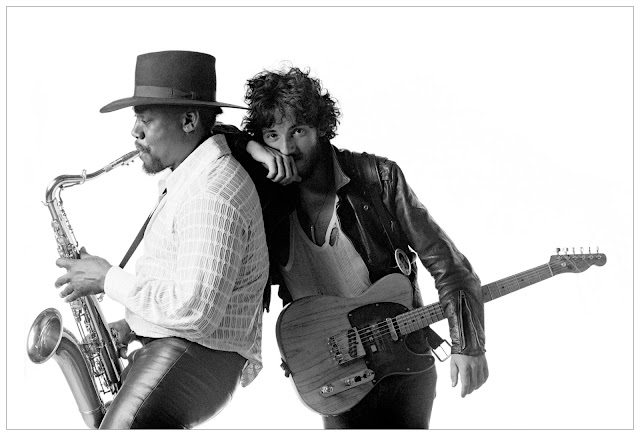